Posted on 8 January 2016 by Simon Boulier

In this post, I would want to present you two things:

I present my hott-colimits library in the first part. This part is quite easy but I hope that the library could be useful to some people. The second part is more original. Lets sketch it.
Given a function

we can construct a diagram

is defined recursively from

. We call this diagram the iterated kernel pair of

. The result is that the colimit of this diagram is

the homotopy fiber of

).
It generalizes Floris’ result in the following sense: if we consider the unique arrow

the one-step truncation of

and the colimit is equivalent to

We then go further. Indeed, this HIT doesn’t respect the homotopy levels at all: even

is the circle. We try to address this issue considering an HIT that take care of already existing paths:

This HIT avoid adding new paths when some elements are already equals, and turns out to better respect homotopy level: it at least respects hProps. See below for the details.
Besides, there is another interesting thing considering this HIT: we can sketch a link between the iterated kernel pair using

and the Čech nerve of a function. We outline this in the last paragraph.

All the following is joint work with Kevin Quirin and Nicolas Tabareau (from the CoqHoTT project), but also with Egbert Rijke, who visited us.

All our results are formalized in Coq. The library is available here:

In homotopy type theory, Type, the type of all types can be seen as an ∞-category. We seek to calculate some homotopy limits and colimits in this category. The article of Jeremy Avigad, Krzysztof Kapulkin and Peter LeFanu Lumsdaine explain how to calculate the limits over graphs using sigma types. For instance an equalizer of two function

.
The colimits over graphs are computed in same way with Higher Inductive Types instead of sigma types. For instance, the coequalizer of two functions is

In both case there is a severe restriction: we don’t know how two compute limits and colimits over diagrams which are much more complicated than those generated by some graphs (below we use an extension to “graphs with compositions” which is proposed in the exercise 7.16 of the HoTT book, but those diagrams remain quite poor).

We first define the type of graphs and diagrams, as in the HoTT book (exercise 7.2) or in hott-limits library of Lumsdaine et al.:

And then, a cocone over a diagram into a type

. Then we can extend

. It gives us a function

is said to be universal if, for all other cocone

over the same diagram,

can be obtained uniquely by extension of

, that we translate by:

is said to be a colimit of the diagram

if there exists a universal cocone over

The existence of the colimit over a diagram is given by the HIT:

be two diagrams over the same graph

. A morphism of diagrams is defined by:

We can compose diagram morphisms and there is an identity morphism. We say that a morphism

is an equivalence of diagrams if all functions

are equivalences. In that case, we can define the inverse of

(reversing the proofs of commutation), and check that it is indeed an inverse for the composition of diagram morphisms.

We yet defined forward extension of a cocone by postcomposition, we now define backward extension. Given a diagram morphism

, we can make every cocone over

. It gives us a function 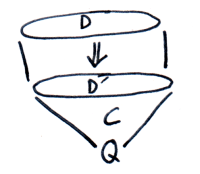 We check that precomposition and postcomposition respect the identity and the composition of morphism. And then, we can show that the notions of universality and colimits are stable by equivalence.

be a diagram morphism and

. Then, we can get a function

We check that if

is an equivalence of diagram then the function

is well an inverse of

.
As a consequence, we get:

The colimits of two equivalents diagrams are equivalent.

In particular, if we consider the identity morphism

be two colimits of the same diagram, then:

So, if we assume univalence, the colimit of a diagram is truly unique!

be a type and, for all

a diagram over a graph

. We can then build a new diagram over

whose objects are the

are induced by the identity on the first component and by

on the second one. Let’s note

Seemingly, from a family of cocone

, we can make a cocone over

We proved the following result, which we believed to be quite nice:

Let’s first recall the result of Floris. An attempt to define the propositional truncation is the following:

is not a proposition, the path constructor

is not strong enough. But we have the following result:

be a type. Let’s consider the following diagram:

is a colimit of this diagram.

Let’s generalize this result to a function

(we will recover the theorem considering the unique function

the colimit of the kernel pair of

is the following HIT:

we get a function

by universality (another point of view is to say that

Then, iteratively, we can construct the following diagram:

.
The iterated kernel pair of

We proved the following result:

The colimit of this diagram is

The proof is a slicing argument to come down to Floris’ result. It uses all properties of colimits that we talked above. The idea is to show that those three diagrams are equivalent.

) at each type. Going from the second to the third is more involved, we don’t detail it here. And

is well the colimit of the last line: by commutation with sigmas it is sufficient to show that for all

is the colimit of the diagram

which is exactly Floris’ result!
The details are available here.

The previous construction has a small defect: it did not respect the homotopy level at all. For instance

of course), we go through very complex types.

We found a way to improve this: adding identities!
Indeed, the proof keeps working if we replace

which is defined by:

can be seen as a “colimit with identities” of the following diagram :

In his article, Floris explains that, when

are not equal. But now they become equal: by path induction we bring back to

. That is, if two elements are already equal, we don’t add any path between them.
And indeed, this new HIT respects the homotopy level better, at least in the following sense:

Toward a link with the Čech nerve

is a generalization of his kernel pair: it is the simplicial object

(the degeneracies are not dawn but they are present).

We will call n-truncated Čech nerve the diagram restricted to the n+1 first objects:

The kernel pair (♣) is then the 1-truncated Čech nerve.

We wonder to which extent

could be the colimit of the (n+1)-truncated Čech nerve. We are far from having such a proof but we succeeded in proving :

(both in the sense of “graphs with compositions”, see exercise 7.16 of the HoTT book).

The second point is quite interesting because it makes the path concatenation appear. We don’t detail exactly how, but to build a cocone over the 2-trunated Čech nerve into a type

must have a certain compatibility with the path concatenation.

doesn’t have such a compatibility: if

, in general we do not have

have the require compatibility: we can prove that

has indeed the type

.)
This fact is quite surprising. The proof is basically getting an equation with a transport with apD and then making the transport into a path concatenation (see the file link_KPv2_CechNerve.v of the library for more details).

Many questions are left opened. To what extent

is linked with the (n+1)-truncated diagram? Could we use the idea of the iterated kernel pair to define a groupoid object internally? Indeed, in an ∞-topos every groupoid object is effective (by Giraud’s axioms) an then is the Čech nerve of his colimit…

This entry was posted in Code, Higher Inductive Types. Bookmark the permalink.

14 Responses to Colimits in HoTT