In this post, I want to talk about a construction of the propositional truncation of an arbitrary type using only non-recursive HITs. The whole construction is formalized in the new proof assistant Lean, and available on Github. I’ll write another blog post explaining more about Lean in August.

The construction of the propositional truncation of a type

is as follows. Let

be the following HIT:

I call this the “one step truncation”, because the HIT is like the propositional truncation, but takes out the recursive part. Martin Escardo calls this the generalized circle, since

. We can repeat this multiple times:

of this sequence is the propositional truncation of

. To make sure we’re on the same page, and to introduce the notation I use for the constructors, the (sequential) colimit is the following HIT: (I will mostly leave the arguments in

First of all this is the first instance of a HIT which has a recursive path constructor which has been reduced to non-recursive HITs. During the HoTT workshop in Warsaw there was a conjecture that all HITs with recursive (higher) path constructors can be reduced to HITs where only point constructors are allowed to be recursive. Although I have no idea whether this conjecture is true in general, this is the first step towards proving it.

Secondly, this gives an alternative answer to the question about the universal property of the propositional truncation. This construction shows that (using function extensionality) a function

for an arbitrary type

is “the same” as a sequence of functions

defined above) such that for all

So, why does the construction work?
To give an intuition why this works consider the propositional truncation of the booleans,

. Of course, this type is equivalent to the interval (and any other contractible type), but there is actually a little more going on. The path constructor of the propositional truncation (let’s call it

. Since the resulting type is a mere proposition, these paths must be equal. We can construct a path between them explicitly by using the continuity of

. We can prove that for every

by path induction, and this leads to the conclusion that any two elements in

are equal. This is exactly the proof that any proposition is a set.

. This is a type with points

and we have two paths from

. These two paths are not equal. Of course, we also have a loop at both

.
However, in the type

are equal. To see this, we can mimic the above proof. We can prove that for all

, just by path induction on

. Then we can conclude that

there are new paths of type

, but they will be identified again in

<sidenote>
The above argument also shows that if any function

is weakly constant, then

is weakly constant for any

So this is the intuition why

is the propositional truncation of

a path is added between any two points of

higher paths are added between all newly introduced (higher) paths, and so on. In the colimit, paths exist between any two points, parallel paths, and parallel higher paths, so we get the propositional truncation.

(the constructor of the colimit) has type

. Now we still have to show two things:

2. The second part is easy. If we’re given a family of propositions

we have to construct a map

. We do this by induction on

. Since we construct something in

, which is a mere proposition, the path construction is automatic, and we only have to deal with the case that

. Now we do induction on

, we can choose the element

, so we can induct on

, we need an element of

. We have an element of

by induction hypothesis. So we can transport this point along the equality

to get the desired point. The path construction is again automatic. In pattern matching notation we have defined:

is also the (judgmental) computation rule for the propositional truncation.

1. So we only need to show that

is a mere proposition, i.e.

. We first do induction on

is a mere proposition. (Left as exercise to the reader. Hint: assume that it is inhabited.) So we only have to consider the case where

is a point constructor, say

. Now we do induction on

. Now the goal is

, and we don’t know (yet) that this is a mere proposition, so we have to show two things:

In particular, we want to make the construction of

as simple as possible, so that the coherence condition for

For the construction of

live in the same level, i.e. where

. This will be used in the general construction. In this case, we have

, where the second equality is by the path constructor

and the other two equalities are by the path constructor

of the colimit. Let’s call this equality

For the general construction of

, I have considered three approaches. I will first discuss two approaches where I failed to complete the proof.

(failed) Approach 1. Induct on both

. In the successor case, induct on

. Unfortunately, this becomes horrible very quickly, because we now have a nested double induction on HITs. This means that we already need to prove coherence conditions just to construct

, and after that we still need to show that

satisfies a coherence condition. I quickly gave up on this idea.

, and then show that

, where the second equality is

. This works, but there is a catch:

(assuming addition is defined by induction on the second argument). So to complete the construction, we also have to transport along the equality

. This is fine, but for the coherence condition for

this transport becomes an annoying obstacle. Showing the coherence condition is possible, but I didn’t see how to do it. Then realized there was a more convenient approach, where I didn’t have to worry about transports.

and induct on those inequalities. I’m assuming that the inequality is defined by an (ordinary) inductive family

This definition gives a very useful induction principle for this construction. If

we can construct a map

I use the notation

for this, similar to

, because we repeatedly apply

and the number of times is determined by

is a mere proposition,

doesn’t really depend on

, only on the fact that its type

has an inhabitant.
We can now also show that

as concatenation of multiple

, where the first equality is

This is a nice and simple construction of

(without transports), and we can prove the coherence conditions using this definition, but that is more involved.

in such a way that for

and in the case that

. This is not purely by definition, for the case

we have to prove something here, because we cannot get both inequalities by definition.

Now we have to show that

In this case we can find

The situation is displayed below (click image for larger view). Some arguments of paths are omitted, and the maps

are also omitted for readability (the actual equalities live in

). We need to fill the pentagon formed by the outer (thick) equalities. 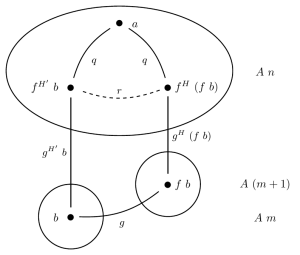 we can find a path

and by another induction on

we can fill the bottom square in the diagram. We will skip the details here. The top triangle can be filled for a general path

. This finishes the case

Now we can find

. The situation is below. 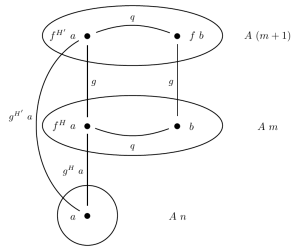 , so the triangle in the left of the diagram is a definitional equality. We can prove the remaining square in more generality. See the below diagram, where we mention 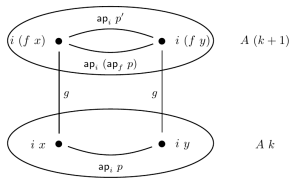 The bottom square is filled by induction on

. To show that the two paths in the top are equal, first note that

is weakly constant, because that is exactly the type of

is weakly constant. This finishes the case

, and hence the proof that

is a mere proposition.

Future Work
The natural question is whether we can construct arbitrary

-truncations using non-recursive HITs. The construction in this post can be easily generalized by using an “one-step

-truncation,” but the proof that the resulting type is

-truncated cannot be generalized easily. However, Egbert Rijke has a proof sketch of the construction of localizations between

-compact types using nonrecursive HITs, and these include all the

This entry was posted in Code, Higher Inductive Types. Bookmark the permalink.