Composition is not what you think it is! Why “nearly invertible” isn’t.

A few months ago, Nicolai Kraus posted an interesting and surprising result: the truncation map |_| : ℕ → ‖ℕ‖ is nearly invertible. This post attempts to explain why “nearly invertible” is a misnomer.

I, like many others, was very surprised by Nicolai’s result. I doubted the result, tried to push the example through using setoids (the clunky younger sibling of higher inductive types), succeeded, and noted that the key step was, unsurprisingly, that the notion of “respecting an equivalence relation” for a dependent function involved transporting across an appropriate isomorphism of the target types. I accepted it, and added it to my toolbox of counterexamples to the idea that truncation hides information. It was surprising, but not particularly troubling; my toolbox had already contained the example that, for any fixed

is contractible, even though

Others had more extreme reactions. This post made some people deeply uncomfortable. Mike Shulman became suspicious of judgmental equality, proposing that β-reduction be only propositional. When I brought this example up in my reading group last week, David Spivak called it a “hemorrhaging wound” in our understanding of homotopy type theory; this example deeply violated his homotopical intuition, and really required a better explanation.

What follows is my attempt to condense a four hour discussion with David on this topic. After much head-scratching, some Coq formalization, and a decent amount of back-and-forth, we believe that we pinpointed the confusion to the notion of composition, and didn’t see any specific problems with judgmental equality or β-reduction.

To elucidate the underlying issues and confusion, I will present a variant of Nicolai’s example with much simpler types. Rather than using the truncation of the natural numbers ‖ℕ‖, I will use the truncation of the booleans ‖Bool‖, which is just the interval. All code in this article is available on gist.

We construct a function out of the interval which sends zero to true and one to false, transporting across the negb (boolean negation) equivalence:

The ... in the definition of myst is an uninteresting path involving univalence, whose details are available in the corresponding code.

We can now factor the identity map on Bool through this function and the inclusion i:

(Note: If we had used ‖Bool‖ rather than the interval, we would have had a slightly more complicated definition, but would have had judgmental factorization on any variable of type Bool, not just true and false.)

Nicolai expounds a lot more on the generality of this trick, and how it’s surprising. My discussion with David took a different route, which I follow here. As a type theorist, I think in

s, in dependent functions; Nicolai’s trick is surprising, and tells me that my intuitions about functions don’t carry over well into type theory, but nothing more. As a category theorist, David thinks in morphisms of types; Nicolai’s trick is deeply disturbing, because the truncation morphism is fundamentally not invertible, and if it’s invertible (in any sense of the word), that’s a big problem for homotopy type theory.

Let’s look more closely at the interface of these two pictures. It is a theorem of type theory (with functional extensionality) that there is an equivalence between dependent functions and sections of the first projection. The following two types are equivalent, for all

So what does myst look like on the fibration side of the picture?

We have the following pullback square, using 2 for Bool and I for the interval: 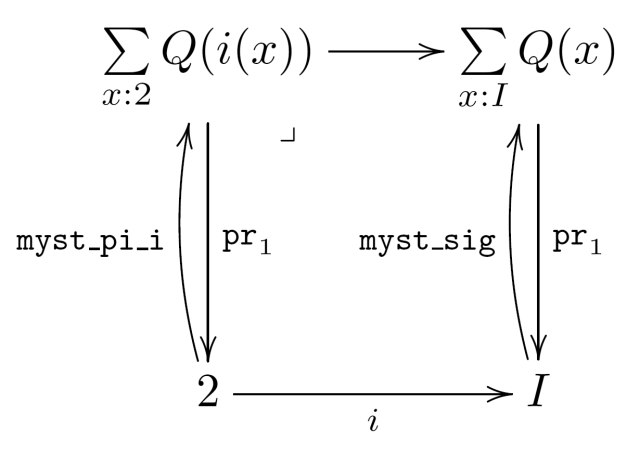 The composition myst_sig_i ≡ myst_sig ∘ i induces the section myst_pi_i corresponding to the β-reduced composite myst ∘ i, which Nicolai called id-factored. (This is slightly disingenuous, because here (as in Nicolai’s post), ∘ refers to the dependent generalization of composition.) In Coq, we can define the following:

David confronted me with the following troubling facts: on the fibrational,

So what went wrong? (Think about it before scrolling.)

Those of you who were checking types carefully probably noticed that myst_sig_i and myst_pi_i have different codomains.

The reason they have different codomains is that we constructed myst_sig_i by composing morphisms in the fibrational picture, but we constructed myst_pi_i by composing functions on the dependent function side of the picture. Dependent function composition is not morphism composition, and involves the extra step of taking the morphism induced by the pullback; if we want to recover morphism composition, we must further compose with the top morphism in the pullback diagram: 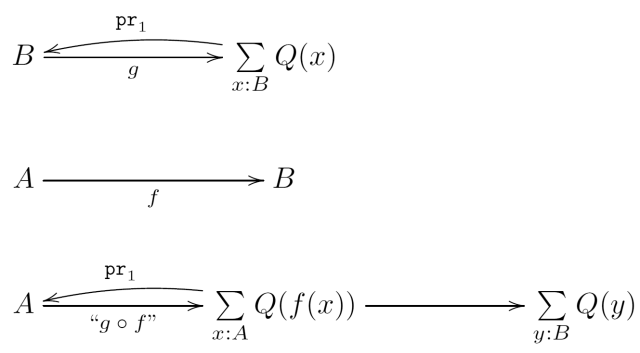 equivalence, which I do here in Coq.

We have explained what the mistake was, but not why we made it in the first place. David came up with this diagram, which does not commute, expressing the mistake:

type over a constant family. Category theorists think of

types as a special case of morphisms with extra data; they are sections of the first projection of a

And as for the fact that this means that truncation doesn’t hide information, I say that we have much simpler examples to demonstrate this. When I proposed equality reflection for types with decidable equality, Nicolai presented me with the fact that

is contractible, even when

16 Responses to Composition is not what you think it is! Why “nearly invertible” isn’t.