A little while ago, we gave an overview of the kinds of results in homotopy theory that we might try to prove in homotopy type theory (such as calculating homotopy groups of spheres), and the basic tools used in our synthetic approach to the subject (such as univalence and higher inductive types).   The big open questions are: How much homotopy theory can one do in this synthetic style? And, how hard is it to work in this style, and to give computer-checked proofs of these results?

Thus far, our results have been quite encouraging on both of these fronts: We’ve done a significant swath of basic homotopy theory synthetically, including calculations of  πn(Sn),  π3(S2),  and π4(S3); proofs of the Freudenthal suspension theorem, the Blakers-Massey theorem, and van Kampen’s theorem; a construction of Eilenberg-Mac Lane spaces; and a development of the theory of covering spaces.  We’ve given computer-checked proofs for almost all of these results, and the process has been quite pleasant and fun.  Lengthwise, the computer-checked proofs are comparable with, and in some cases shorter than, the same proof written out in a traditional style.    Moreover, the proofs have involved a blend of classical homotopy theoretic ideas and type theoretic ideas.  While most of what we have done is to give new proofs of existing results, these techniques have started to lead to new results, such as a proof of the Blakers-Massey theorem in general ∞-topoi (which we gave by translating the type-theoretic proof).  Additionally, we have one example (π4(S3)) illustrating the promise of the constructive aspects of homotopy type theory.  Finally, these proofs have furthered our understanding of the computational aspects of homotopy type theory, particularly about computing with higher identity types.

This post will describe the results that we’ve gotten so far—particularly this spring, during the special year at IAS.  This was a big collaborative effort: many people contributed to it, by being the principal author of a proof or formalization, by suggesting problems to work on, by giving feedback on results, or by contributing to discussions and seminars. When the spring IAS term started on January 14th, we had a proof that π1(S1) is Z and that πk(S1) is trivial otherwise (by Mike Shulman), and a proof that πk(Sn) is trivial for k<n (by Guillaume Brunerie).  Here’s what that looks like in the chart of homotopy groups of spheres: 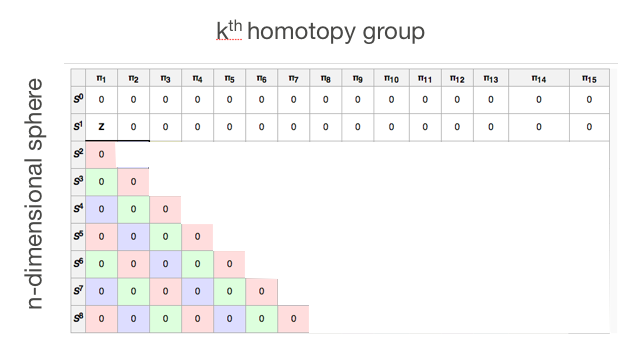 And, here’s what we had proved about homotopy groups of spheres by the end of the term (we’ll explain the grey/white highlights below): 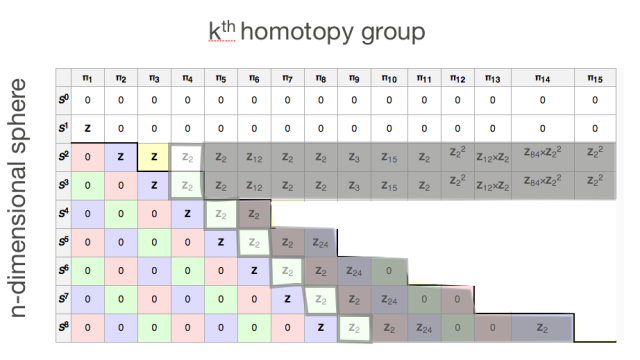 Let’s go through the theorems that fill in this table:

In addition to homotopy groups of spheres, we have proved the following theorems:

You can find out more about these results in the following places:

Finally, there is a lot of low-hanging fruit left to pick!  If you are interested in getting involved, leave a comment, or send an email to someone mentioned above (or to the HomotopyTypeTheory google group).

This entry was posted in Higher Inductive Types, Homotopy Theory. Bookmark the permalink.